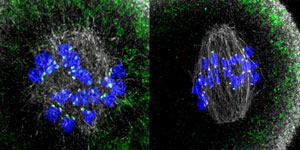 The error-free division of mouse oocytes—the precursors of eggs—needs kinetochores that are rich in a specific microtubule crosslinker, RIKEN researchers have discovered1. This finding could explain why the division of human oocytes often gives rise to errors, and thus inform efforts to help prevent pregnancy loss and congenital disorders.

Human oocytes are more susceptible to errors during the segregation of genetic material compared to the oocytes of other mammals. These errors can result in miscarriages and congenital disorders such as Down syndrome.

When a cell starts dividing, it forms spindles—the microtubule-based machinery for dividing the genetic material in a cell. However, oocytes are unique among cells in that their spindles lack centrosomes—the main apparatus for organizing microtubules in a cell. Thus, oocytes must have a different way for assembling spindles, but much remains unknown about this mechanism.

Now, Tomoya Kitajima of the RIKEN Center for Biosystems Dynamics Research and his co-workers have found that mice need kinetochores (the main point of attachment for spindle microtubules) rich in the microtubule crosslinker Prc1 to achieve error-free formation of spindles during oocyte cell division.

By drawing on their experience of high-resolution live imaging of chromosome dynamics in mouse oocytes, Kitajima and his colleagues carefully quantified spindle bipolarity in three dimensions in live oocytes. They found that while microtubules polymerize in oocytes that lack functional kinetochores, they do not go on to form spindles. The researchers also discovered that kinetochores recruit Prc1 (Fig. 1), which links microtubules and is thus essential for the efficient assembly of spindles.

Significantly, the team found that kinetochores in humans are not rich in Prc1. This difference between mouse and human oocytes could go a long way to explaining why oocyte division in humans is more error prone than that in mice.

“This finding gives key insights into why female meiosis is error prone in humans,” says Kitajima. “Failure of spindle assembly is a hallmark of oocytes that have errors in chromosome segregation, which in turn gives rise to eggs having an abnormal number of chromosomes—a major cause of pregnancy loss and congenital disease and thus a critical problem for reproductive health.”

Kitajima did not anticipate this result. “This finding came as a surprise as we never suspected that a kinetochore protein specific to female meiosis existed,” says Kitajima.

The researchers are now investigating the molecular mechanisms for how Prc1-rich kinetochores sort microtubules for spindle assembly. They will also look for molecules that enhance Prc1 recruitment to kinetochores in mice.