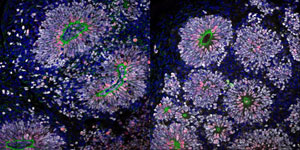 The brain changes that occur at the onset of psychiatric conditions such as schizophrenia and bipolar disorder could originate from a disturbance in neuronal signaling pathways during brain development, RIKEN neuroscientists have found1. This knowledge could provide researchers with new strategies for treating these conditions.

Schizophrenia and bipolar disorder are some of the hardest mental health disorders to manage, in large part due to their complexity. In particular, the cellular mechanisms that underpin these conditions remain poorly understood. Diverse genetic and environmental factors give rise to psychosis, and it can be difficult to disentangle their various contributions.

To overcome this problem, Tomoyo Sawada of the RIKEN Center for Brain Science (CBS) and her co-workers recruited a pair of identical twins where only one twin suffered from schizoaffective disorder, bipolar type—a condition characterized by both schizophrenic and bipolar disorder symptoms. Since identical twins are genetically identical, this provided a controlled genetic background for the study. The researchers validated their findings through further investigations involving two more pairs of identical twins where one twin had schizophrenia.

To model the early stages of brain development, the researchers took cells from participants’ blood and reprogrammed them into stem cells (induced pluripotent stem cells, or iPSCs). These iPSCs were differentiated into neurons, which formed three-dimensional tissue cultures known as organoids.

Postmortem analyses of patients with schizophrenia and bipolar disorder had previously shown reduced expression of inhibitory neurons. “Such a paradoxical phenomenon has also been reported in autism,” explains Tadafumi Kato, also at the CBS. “The brain volume is larger than controls during the developmental stage, but it is smaller in the adult stage.” This suggests that the lower numbers of inhibitory neurons found in adults with psychosis may be due to their enhanced production during early brain development.

The study was a first of its kind. “This is the first detailed analysis of cerebral organoids for studying psychiatric disorders,” says Sawada. “It also represents the first use of single-cell RNA sequencing to compare brain organoid data for psychiatric disease markers.” Sawada’s team now intends to determine the link between enhanced early GABA signaling and psychosis development by adapting brain organoids derived from iPSCs to model the adult brain.