Nuclearites, a form of exotic space matter, found to be very rare 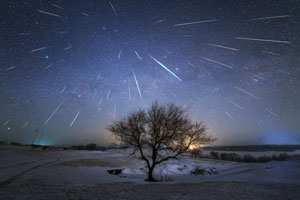 Figure 1: Shooting stars, such as in this shower seen in China, are caused by small particles burning up in the upper atmosphere. Heavy compact objects, including nuclearites, which are candidates for dark matter, would travel faster than meteors and produce long tracks of almost constant brightness in the lower atmosphere. © JEFF DAI/ SCIENCE PHOTO LIBRARY

A hunt for bizarre cosmic objects streaking through Earth’s atmosphere has drawn a blank—but by ruling out a widespread bombardment by these objects, the results should help to refine theories about possible forms of dark matter in the Universe1.

Over the past century, astrophysicists have discovered that unseen forms of matter could account for about 85% of the Universe’s mass. This dark matter has never been directly detected, but its presence can be inferred from the movement of galaxies and other phenomena. One candidate for dark matter is heavy compact objects, which contain extremely dense forms of exotic material such as ‘strange quark matter’.

When space rocks strike the atmosphere, they become meteors that heat up and generate rather short, variable streaks of light in the upper atmosphere, until they cool down or disintegrate. In contrast, heavy compact objects such as ‘nuclearites’ that usually travel at hundreds of kilometers per second—several times faster than meteors—and produce long tracks of almost constant brightness in the lower atmosphere.

Lech Piotrowski at the RIKEN Computational Astrophysics Laboratory and colleagues have now trawled through telescope images in search of these nuclearite traces. The data came from the Pi of the Sky project, a system of robotic telescopes in Spain and Chile. The very wide angle of view and large amount of data collected over several years of this project made it suitable for searching for bright, rare phenomena such as trails left by heavy compact objects.

The researchers developed a computer algorithm to look for nuclearite traces in hundreds of thousands of images from these telescopes. After the algorithm had removed events caused by cosmic rays, meteors and satellites, the astronomers narrowed down the pool of images to just 20 that did not have an obvious explanation. However, none of these were a good match for the traces expected from nuclearites. This implies that nuclearites, if they exist, are very rare. If nuclearites reached Earth at an equal rate from all directions, the absence of traces suggests that no more than two nuclearites with masses of 100 grams will hit a square kilometer of the Earth’s atmosphere every decade. Heavier nuclearites are even scarcer—a 100-kilogram nuclearite would pass through a square-kilometer area less often than once per century.

“Our limits can be used to put constraints on specific types of heavy compact objects, not necessarily nuclearites, and their distribution in the Universe,” says Piotrowski. “But it is important to improve on the limits.” He hopes that future experiments using ground-based and orbiting telescopes will conduct an even more sensitive search for nuclearites.