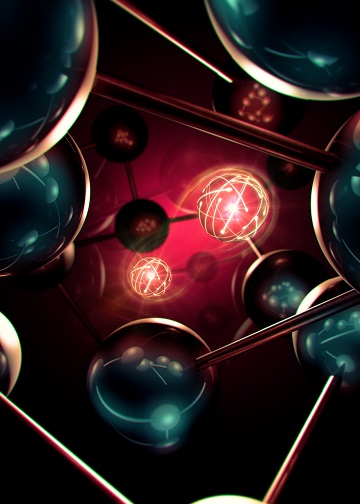 Calculations for certain quantum systems whose parts interact over long distances will be much easier to perform thanks to the work of a RIKEN physicist and his collaborator, who have extended an assumption that holds for materials with short-range interactions1.

Famously dubbed “spooky action at a distance” by Albert Einstein, entanglement is one of the most fascinating aspects of quantum physics. It is an invisible connection between quantum systems that means that one system cannot be fully described without including the states of the others—a link that cannot be understood using classical mechanics.

In many materials, entanglement occurs over a short range, existing only between nearest neighbors. These systems have been shown to have a low entanglement entropy. Known as the area law conjecture, this assumption greatly simplifies modeling.

But some materials can exhibit unusual states of matter in which the interactions between atoms can be maintained over longer distances. And so the question arises: does the area law still hold in materials with non-local quantum connections? This is the question investigated by Tomotaka Kuwahara from the RIKEN Center for Advanced Intelligence Project and Keiji Saito from Keio University.

Providing a detailed proof of an area law is extremely challenging. Kuwahara and Saito simplified the mathematics of the problem by modeling a one-dimensional chain. They looked at a chain of long-range interacting magnetic particles. They decomposed the total system into two subsystems, left and right, and simulated the boundary as a series of discrete points. In this way, the pair showed that the entanglement entropy has a maximum possible value, which is a signature of an area law.

“The next step for us is to prove the area law conjecture in systems with more than one dimension,” says Kuwahara. “We exploited several new mathematical techniques in our present study, and we hope to apply them to higher dimensional cases.”