Ignition and combustion processes leave their imprint on supernova remnants 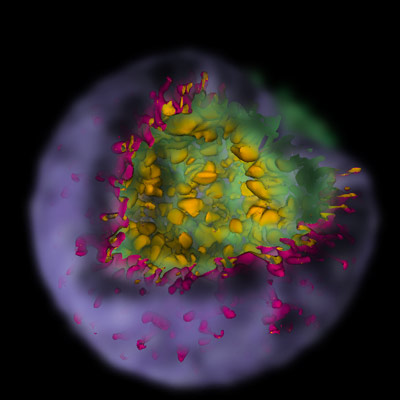 Figure 1: A supernova creates a cloud of debris that bears an imprint of the explosion. In this visualization of the simulation data, one quarter of the remnant’s outer shell has been removed to reveal the clumps of matter within (colors denote different materials). Credit: Reproduced from Ref. 1 by permission of the AAS.

Astronomers are now in a better position to interpret observations of supernova remnants thanks to computer simulations of these cataclysmic events by RIKEN astrophysicists1.

When certain types of stars die, they go out in a blaze of glory—an incredibly powerful explosion known as a supernova. One of the most common forms of supernova, type Ia, starts with a dense white dwarf star that has burned up its hydrogen fuel. Matter flowing from a companion star can jump-start a runaway nuclear fusion reaction in the dwarf, triggering a massive conflagration that creates many of the heavier elements in the Universe. These are hurled outward in a luminous cloud known as a remnant, which bears an imprint of the explosion.

Gilles Ferrand of the RIKEN Astrophysical Big Bang Laboratory and colleagues in Japan and Germany have been developing three-dimensional computer simulations that recreate supernovae. Their simulations involve two steps: the first one models the supernova explosion itself, while the second one uses that as the input for a model of the supernova remnant. “Our goal is to explore how different explosion conditions produce remnants with characteristic shapes and compositions, similar to those we observe in our Galaxy,” explains Ferrand. 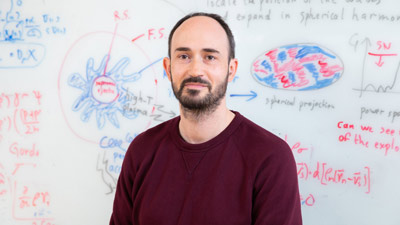 Gilles Ferrand and co-workers have used computer simulations to explore how ignition and combustion processes influence the debris from supernova explosions.© 2021 RIKEN

The team’s latest simulations focus on two aspects of supernovae: how the explosion ignites inside a white dwarf, and how combustion rips through the star. Ignition can start at just a few places inside the white dwarf, or it can be triggered at many points simultaneously. Meanwhile, the combustion might be a deflagration—a turbulent fire that moves slower than the local speed of sound—or it may involve deflagration followed by supersonic detonation.

By putting these options together in different ways, the researchers produced four models of supernova remnant. “Each model has its distinctive properties,” says Ferrand. For example, a supernova with few ignition points and a deflagration explosion produced a remnant with a symmetric shell that was offset from the center of the explosion. In contrast, a simulation involving few ignition points and a detonation produced a remnant in which half of the outer shell was twice as thick as the other half. Remnants from the deflagration simulations also featured unexpected ‘seams’ of denser material.

These results suggest that the best time to see a supernova’s imprint on its remnant is within roughly 100–300 years after the explosion. This imprint is visible for longer in supernovae with fewer ignition points, and all the remnants in the simulations became spherical overall within 500 years. These results will guide astronomers as they interpret observations of supernova remnants.