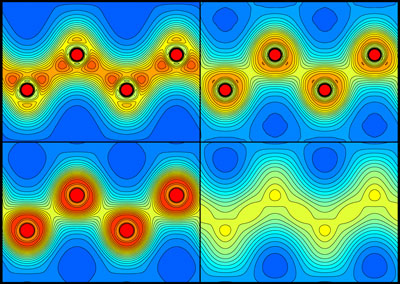 Figure 1: Plots showing the distribution of electrons in diamond before (top left) and 5 (top right), 20 (bottom left) and 50 (bottom right) femtoseconds after being irradiated by a pulse of x-rays from an x-ray free-electron laser. They show that the carbon–carbon bonds break after about 5 femtoseconds. Reprinted, with permission, from Ref. 1. Copyright (2021) by the American Physical Society.

The ultrafast melting of diamond under intense x-ray irradiation has been visualized for the first time by RIKEN researchers1. This observation will help scientists improve experimental methods that use high-intensity x-ray pulses to determine the structures of materials.

Theoretically, to melt a diamond you would need to put it in an oven and set the temperature to over 3,500 degrees Celsius (in fact, it would turn into graphite well before melting). But RIKEN scientists have observed diamond melting at much lower temperatures by hitting it with ultrashort pulses from an x-ray free-electron laser (XFEL).

XFELs are powerful instruments that have been available for little more than a decade. They produce trains of intense x-ray pulses that can be used to study the structure and dynamics of many kinds of samples. Their ability to image individual atoms on a time scale of femtoseconds (quadrillionths of a second) makes them ideal for studying biological and chemical processes and material structures in great detail.

XFEL pulses are known to excite many electrons at once, causing irreversible disorder in the sample. But the exact mechanism by which this damage happens was unknown.

Now, Ichiro Inoue and Makina Yabashi, both of the RIKEN SPring-8 Center, along with their collaborators, have used a technique that employs a first x-ray pulse to excite a sample, and a second pulse with different energy and a small time delay to probe the effects of the first pulse. This method enabled them to follow closely what happened in the sample after it was hit by the x-rays.

The experiments were conducted at the SPring-8 Angstrom Compact free electron Laser (SACLA), which in 2011 became the second XFEL in the world to start operations. “Among XFEL facilities in the world, SACLA has a unique capability to produce ultra-intense, double x-ray pulses with different wavelengths,” comments Yabashi. “This property is desirable for conducting the present type of new research.”

The researchers visualized the distribution of charges around the carbon atoms in a diamond sample after XFEL irradiation. The carbon–carbon bonds broke after about 5 femtoseconds, and the atoms started behaving like isolated atoms, moving from their original positions and causing the material to melt.

This time scale is much faster than the bond breaking caused by heating, and supporting simulations showed that the melting is indeed non-thermal. Instead, it is induced by a modification of the potential energy felt by the atoms.

Such non-thermal melting can be expected to happen in many XFEL experiments, and is thus an important factor to consider in any study of structure determination with XFEL pulses.