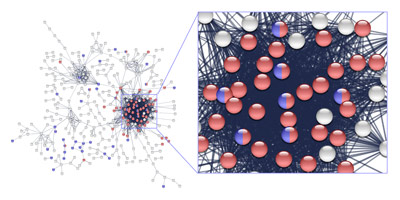 Figure 1: An interaction map of proteins produced by genes differentially expressed in acute myeloid leukemia cells revealed vulnerabilities that could be targeted using drugs. Reprinted, by permission, from Ref. 1; copyright 2021

A new combination of drugs that may have the potential to treat a type of leukemia has been uncovered by a detailed molecular examination of leukemia cells by RIKEN researchers1.

Acute myeloid leukemia (AML) is a cancer of the bone marrow and the blood. If left untreated, it develops rapidly and can cause death within weeks or months. While there are several treatments for the disease, current options for treating aggressive, therapy-resistant AML are limited and clinical outcomes remain poor.

In search of new ways to attack the disease, Fumihiko Ishikawa of the RIKEN Center for Integrative Medical Sciences and his colleagues compared the gene-expression profiles of normal blood stem cells with those of leukemia-initiating cells from AML patients. “By checking which mutations are present in individual patients, we may be able to provide clinicians with information on which molecules should be targeted to eliminate leukemic cells,” explains Ishikawa.

The researchers analyzed 126 patient samples, all from poor-prognosis cases. They discovered several pathways involved in cell survival and proliferation that were consistently more active in the gene sets from AML cells than in those from non-cancerous controls. This suggests there are common signaling pathways and regulatory networks that can be therapeutically targeted in most cases of AML, even though the specific genetic underpinnings of the disease vary from one patient to the next.

Ishikawa’s team tested small-molecule drugs known to block these pathways and then checked their efficacy in humanized mouse models of the disease. They discovered that, despite their genetic differences, AMLs from diverse backgrounds were all susceptible to inhibition of four key proteins: three involved in preventing cell death and one in facilitating cell division.

A combination of two drugs, each aimed at different proteins that normally ward off cell death, proved to be the most effective at eliminating AML in mice implanted with patient-derived leukemia cells. One of these drugs, called venetoclax, is already approved in many countries for treating AML, while another, termed AZD5582, has yet to be evaluated in patients but has shown anti-leukemia potential in other preclinical studies.

The findings, says Ishikawa, underscore the value of further developing AZD5582 (or drugs like it) as a treatment, in tandem with venetoclax, for highly aggressive AML.

The precision-medicine strategy developed by the RIKEN team also provides a blueprint for drug discovery more broadly, he adds. “We now hope to apply our interdisciplinary approach to other diseases that are difficult to treat,” Ishikawa says.