Shining light on a fluid completely changes its dielectric permittivity 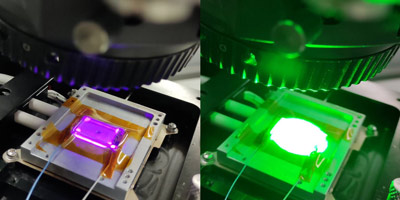 Figure 1: Figure 1: Shining blue light (left) on the fluid caused it to switch to a high dielectric permittivity phase, while shining green light on it (right) reversed the change. Reproduced from Ref. 1 and licensed under CC BY 4.0 © 2020 H. Nishikawa et al.

Three RIKEN researchers have created a liquid whose response to an electric field can be tuned over the largest range of any known material1. The fluid could find use in various applications including wearable electronics.

Now, Hiroya Nishikawa, Koki Sano and Fumito Araoka, all at the RIKEN Center for Emergent Matter Science, have developed a liquid whose dielectric permittivity can range from 200 to 18,000 in just half a minute when light is shone on it.

The trio realized this by combining two molecules. The first molecule is a liquid crystal that has two phases: one with a low dielectric permittivity and the other with an extremely high one. The second molecule is light sensitive. When blue light was shone on the combined molecule, it switched from the low-dielectric-permittivity phase to the high one; when green light was shone on the fluid it reversed the situation, causing it to return to the low-dielectric-permittivity phase (Fig. 1). 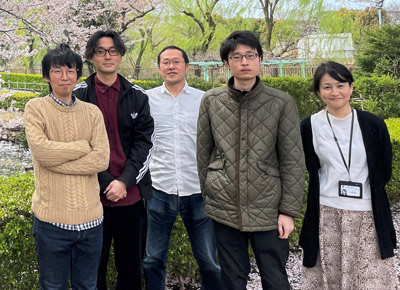 Hiroya Nishikawa (left) and Fumito Araoka (third from left) and Koki Sano (not shown) have demonstrated an anisotropic fluid with a photoresponsive dielectric permittivity. © 2022 RIKEN

Since a high dielectric permittivity is important for creating capacitors that store a lot of electric charge, the fluid could be used in applications that require variable capacitors. “If you wanted to get such a high capacitance, you would need a specially designed capacitor,” says Araoka. “But we could realize a high capacitance by just sandwiching the material between electrodes because the fluid has such a high dielectric permittivity.”

The team demonstrated an application of the fluid by coupling it with a sound generator and using it to change the sound’s pitch over a wide range when they shone light on the fluid.

The team also wants to use the fluid to create flexible electronic devices. “In the current study, we used a glass substrate,” says Nishikawa. “But we can replace it with a flexible film to create devices that can be worn on the skin.”