The normal, symmetric formation of the vertebrate eyes is coordinated by a molecular sensor that responds to mechanical force 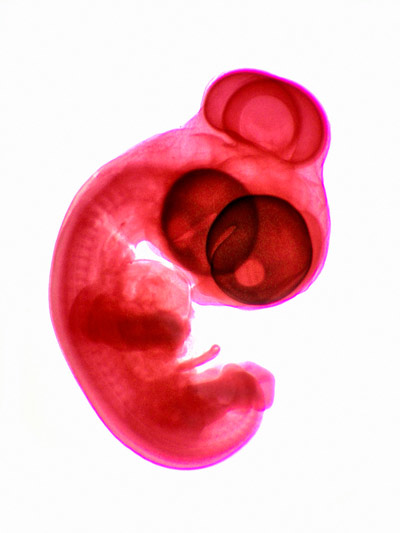 In a surprising discovery with important implications for developmental biology and regenerative medicine, RIKEN biologists have learned how mechanical forces guide the formation of the eyes in chick embryos1.

Healthy embryonic development is guided through the complex interplay of diverse genetic, chemical and physical ‘instructions’. In vertebrate embryos, the visual system originates from a structure called the optic vesicle. This forms at one end of the neural tube, which is the progenitor of the entire nervous system.

During normal development, the optic vesicle extends laterally in both directions, and two eyes ultimately form at the ends of those projections. When this process goes awry, the left and right optic vesicles fail to elongate. Instead, their tips fuse in the center of the face, forming a single eye.

Five researchers, all at the RIKEN Center for Biosystems Dynamics Research, set out to discover how malfunctions in a gene called sonic hedgehog (SHH) contribute to this ‘cyclopia’ birth defect.

Team Leader Yoshihiro Morishita notes that hundreds of papers have delineated SHH’s role in regulating cell proliferation and differentiation during the development of a wide range of organs, including the eyes. But it is unclear precisely how SHH helps orchestrate dynamic tissue deformation to form organ-specific morphologies.

To investigate this, the team compared the pattern of collective cell motion and its contribution to tissue dynamics during eye development in healthy chick embryos with that in embryos treated with an SHH inhibitor.

To their surprise, they learned that SHH signaling regulates sensing and response to physical force, guiding the direction of cell rearrangement and motion under the given stress environment within the forebrain tissue.

“The direction of stress differs depending on the location within the tissue, which in turn changes the direction and degree of elongation and shrinkage, resulting in the creation of the desired shape,” explains Morishita.

When this sensing and response capability is disrupted by the SHH inhibitor, the optic vesicle cells no longer know where to go, and fail to undergo the lateral branching required to produce a pair of functional eyes.

This discovery is exciting for several reasons. Given the prominent role SHH plays in development of many organs, mechanical sensing and response may be a far more important driver of tissue organization and formation than previously recognized. By extension, “randomized cellular behaviors due to loss of mechanosensation might be a common cause of different congenital malformations,” Morishita notes.

A deeper understanding of this mechanism could also benefit researchers trying to recapitulate organ formation in the lab as a tool for disease research or the development of transplantable tissues.