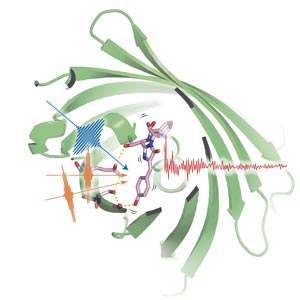 In 1962, Japanese organic chemist Osamu Shimomura isolated a novel protein from a jellyfish that emitted green light―a discovery that earned him a share of the 2008 Nobel Prize in Chemistry. The appropriately named green fluorescent protein (GFP) became an invaluable imaging tool for biologists, illuminating many dark corners of cellular function and activity. But the full details of the mechanism by which GFP emits light remain unclear.

Using an advanced form of the vibrational spectroscopy technique known as Raman spectroscopy, Tahei Tahara from the RIKEN Molecular Spectroscopy Laboratory and colleagues have shone new light on GFP’s glow. They have shown that a low-frequency molecular motion known as phenolic wag is not the key to the protein’s fluorescence1.

GFP’s fluorescent portion lights up by shedding a proton, which gets passed to a neighboring part of the protein. Previous experiments had suggested that this proton transfer might be promoted by a rhythmic wagging motion that periodically brings these two key parts of the GFP molecule closer to each other.

Tahara used a cutting-edge Raman spectroscopy technique to test this idea. “Although we demonstrated their potential more than a decade ago, time-domain Raman measurements of the electronic excited state are still rare, but they can provide clear and detailed information about molecular vibrations,” notes Tahara.

Using three carefully tuned pulses of light, the team excited the GFP molecules in a sample, synchronized their motion, and then probed the protein’s vibrational state while proton transfer occurred (Fig. 1).

The Raman spectra they recorded initially contained peaks due to the high-frequency vibrations of the protonated protein. But these signals faded quickly as a new set of vibrations corresponding to the fluorescent form, which lacks a proton, appeared.

Tracking the reaction over time, the researchers observed a smooth conversion of excited GFP into its deprotonated, fluorescent form. Importantly, they did not observe an oscillating conversion rate, which would have been a telltale sign that the protein’s wagging motion does significantly contribute to proton transfer in GFP.

“Even though the low-frequency motion does not substantially affect the proton transfer dynamics of GFP, the concept of coherently driven chemical reactions has been attracting much interest for a long time,” says Tahara. “We will try to seek and design suitable systems, and hope to eventually unveil the role of coherent nuclear motion in chemical reaction dynamics,” he adds. “Answering these questions will open new doors to understanding chemical reactions in general, and pave a new way to even manipulate reactions themselves.”