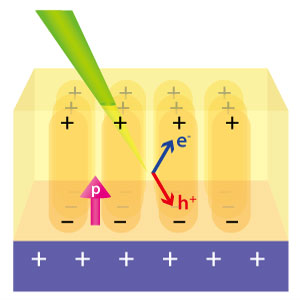 Figure 1: A schematic depiction of a spontaneously polarized solar cell. When light (green beam) strikes a heterointerface with a net electrical polarization (pink arrow), photogenerated charge carriers (e− and h+) can be recovered no matter how slowly they move. Reprinted with permission from Ref. 1. Copyright (2016) by the American Physical Society.

By precisely fabricating nanoscale junctions between two metal oxides, RIKEN researchers have found a way to transform an electrically neutral semiconductor into a polarized material capable of capturing large quantities of light-generated charges1.

Individually, lanthanum aluminate (LaAlO3) and strontium titanate (SrTiO3) are insulators. But when these materials are put into intimate contact at a ‘heterointerface’, a highly conductive two-dimensional (2D) zone is formed. One reason these intriguing interfacial properties emerge is the so-called polar catastrophe: chemical ions at the abrupt, structurally stable LaAlO3–SrTiO3 junction cause charges to rearrange and produce polarized fields that screen the 2D layer from the rest of the material.

Recently, Masao Nakamura and colleagues from the RIKEN Center for Emergent Matter Science developed a ‘correlated’ solar cell that exploits the strong electron correlation in transition-metal oxides to generate multiple charges from a single photon. This technology is promising because it reduces much of the energy loss that normally occurs in solar cells due to heat.

However, the method suffers from poor energy conversion. The team realized that part of the problem was relying on conventional diffusion processes to catch light-generated charges. “Unfortunately, correlated electron materials have low mobilities, which means their active layers are very thin,” explains Nakamura. “We considered different ways to extract photocarriers than those employed in typical junctions, and that led us to study the photovoltaic effect in polar materials.” 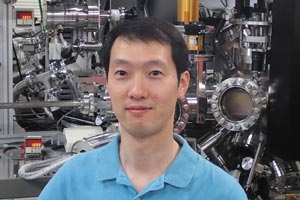 Figure 2: Masao Nakamura in front of the system he used to make a correlated solar cell. © 2016 RIKEN

Some semiconductors have non-symmetric crystal structures that generate larger photovoltages than those predicted by theory. The asymmetric frameworks in these materials help ‘shift’ electrons toward a collection point independent of the charge’s mobility, a feature the RIKEN team harnessed by creating a custom-made polar interface.

To ensure a sharp polar discontinuity, Nakamura and co-workers chose an iron-based lanthanum oxide (LaFeO3) and deposited it in a 30-nanometer layer on a SrTiO3 substrate. When illuminated by laser light, the new interface displayed an intriguing switching of photocurrent direction simply by contacting different sides of the junction (Fig. 1)—clear evidence that the atomic structure was influencing the behavior of the entire bulk material.

Using techniques such as piezoresponse force microscopy and electron holography to characterize the junction, the researchers discovered that although the LaFeO3 layer was originally nonpolar, polar catastrophe forces spontaneously switched its charge distribution.

“Polar materials could act as high-efficiency solar cells, but they usually have large band gaps and hence absorb small amounts of visible light,” says Nakamura. “Our work suggests that heterointerfaces can be used to tailor these substances.”