New research from the RIKEN Center for Integrative Medical Sciences in Japan sheds light on the role of gut bacteria on the maturation of the immune system and provides evidence supporting the use of butyrate as therapy for inflammatory bowel diseases like Crohn’s disease.

Published in the journal Nature today, the Japanese study shows that butyrate, a by-product of the digestion of dietary fiber by gut microbes, acts as an epigenetic switch that boosts the immune system by inducing the production of regulatory T cells in the gut.

Previous studies have shown that patients suffering from inflammatory bowel disease lack butyrate-producing bacteria and have lower levels of butyrate in their gut. However, butyrate’s anti-inflammatory properties were attributed to its role as main energy source for the cells lining the colon. This study is the first to provide a molecular basis for the role of butyrate on the production of regulatory T lymphocytes.

The Japanese team, lead by Dr Hiroshi Ohno from RIKEN in collaboration with the University of Tokyo and Keio University, investigated the molecular mechanisms by which commensal microbes augment the number of regulatory T cells (Treg cells) present in the colon of mice that were bred germ-free.

The study shows that mice suffering from colitis see their levels of Treg cells increase and their symptoms improve after administration of butyrate as part of their diet.

“Regulatory T cells are important for the containment of excessive inflammatory responses as well as autoimmune disorders. Therefore these findings could be applicable for the prevention and treatment of inflammatory bowel disease (IBD), allergy and autoimmune disease,” said Dr Hiroshi Ohno.

“Butyrate is natural and safe as a therapy and in addition to that it is cheap, which could reduce costs for both patients and society,” Dr Ohno added. 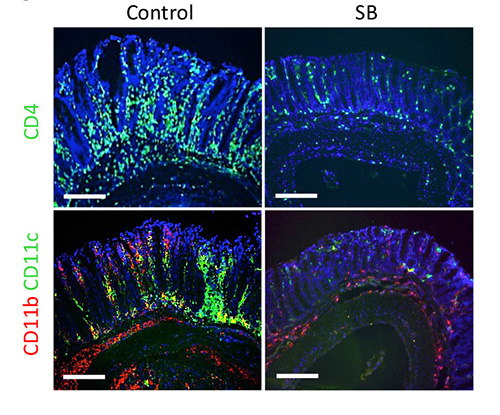 In a mouse model for experimental colitis, a diet supplemented with butyric acid leads to decreased infiltration of inflammatory cells

In a mouse model for experimental colitis, a diet supplemented with butyric acid (SB, right panels) leads to decreased infiltration of inflammatory cells (CD4+ T cells [green] in the upper panels, and CD11b+ macrophages [red] and CD11c+ dendritic cells [green] in the lower panels), compared to those ingesting the diet without butyrate supplementation (control, left panels)