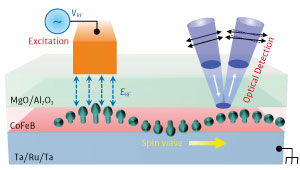 Iron bar magnets possess a permanent magnetization because their atoms tend to align their electron spin with those of their neighbors. Materials with this property are known as ferromagnets.

Perturbing one spin in a ferromagnetic crystal can set off a wave of collective spin motion throughout the crystal. Such spin waves behave similarly to radio waves, making it easy to use them to carry encoded amplitude and phase information in a circuit. Unlike the conveyance of data by electric currents in conventional devices, this data flow does not involve the movement of electrons—eliminating unwanted heating, which plagues the design of modern devices.

When certain ferromagnetic materials are deposited on nonmagnetic insulators, the magnetic spins project perpendicularly from the interface, particularly if the ferromagnetic material is deposited as an ultrathin film. This orientation makes it simple to excite and manipulate spin waves using a static or oscillating electric field.

However, devices with sheet-like structures suffer from a different problem. “Since spin wave signals become weaker in thinner crystals, they are very small in ultrathin films,” says Bivas Rana from the RIKEN Center for Emergent Matter Science. “It’s difficult to detect them by conventional electrical means due to the huge background noise.” 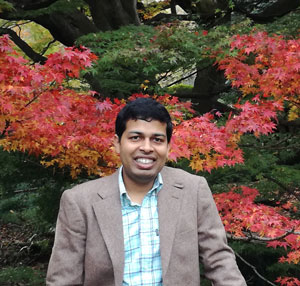 Bivas Rana and his team have injected spin waves into ultrathin magnets. © 2017 RIKEN

Rana and colleagues tried an alternative approach to eliminate stray electrical signals from spin-wave measurements. Through a special optical–magnetic microscope known as a Kerr microscope, they used changes in the intensity and polarization of light beams reflected off magnetic surfaces to detect time-dependent spin-wave motion with an accuracy of picoseconds (10−12 second) and a spatial resolution of a few hundred nanometers.

When the researchers tested a 2-nanometer-thick ferromagnetic film with their Kerr microscope, they spotted something unexpected—an electric field produced by a simple electrode excited linear propagating spin waves (Fig. 1). This is the first time this has been achieved. Since the excitation of these spin waves does not involve charge flow, it will help to develop spintronics devices with ultralow power consumptions.

Unlike the conventional way of exciting spin waves that uses a magnetic field induced by an antenna, spin waves were initially excited in a localized area under the electrode. “Restricting the excitation area under the electrodes could prove crucial for submicrometer-scale spintronic devices since we can place several devices for voltage excitation very close to each other without cross-talk,” Rana explains. “We’re proposing voltage-controlled nanochannels to propagate spin waves, and the nanochannels can be integrated into any shape on a much wider waveguide.”