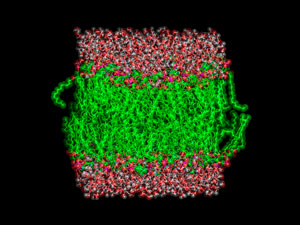 A spectroscopic technique that picks out the signal just from water molecules in thin layers above and below the cell membrane has given RIKEN researchers new insights into the role this water plays in cell processes1.

The thin layers of water on the inner and outer surfaces of cell membranes are vital to managing the flow of ions and small molecules into and out of cells. But it has been hard to study their role because conventional characterization methods cannot distinguish between water at the membrane surfaces and bulk water inside cells.

The team focused on phosphatidylcholine lipids, a major component of biological membranes. They are known as zwitterions because their heads have both negative (phosphate) and positive (choline) parts (Fig. 1). “Hydration at zwitterionic lipids is directly related to the elementary processes of life at the molecular level,” notes Tahara.

Tahei Tahara and his team have used an ultrafast laser to probe the role water plays in transporting ions and small molecules through biological membranes. © 2017 RIKEN

To observe the evolution of the hydration process, the team collected spectra every hundred femtoseconds (one femtosecond = 10−15 second). They confirmed that in model biological membranes both the lipid’s phosphate and choline sites have water molecules grouped around them, as the researchers proposed in 2012.

“This study is just the beginning,” he says. “We still know very little about the dynamics of interfacial molecules.” A deeper understanding of how water behaves on cell membrane surfaces will eventually improve knowledge of biological reactions occurring at cell membranes, he adds.