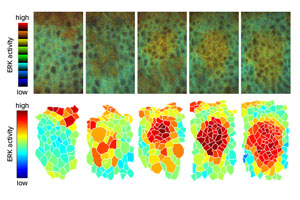 A well-studied signaling molecule employs an unexpected mechanism to coordinate the formation of the respiratory system in fruit flies, RIKEN researchers have discovered1. This discovery will prompt fresh evaluation of the previously accepted model for this process.

The development of embryos is orchestrated through the complex interplay of many cellular signaling pathways, which collaboratively steer the organization of various body structures. Epidermal growth factor receptor (EGFR) sits at the center of many critical cellular processes, governing both normal development and the abnormal growth that occurs in tumors.

A team led by Shigeo Hayashi of the RIKEN Center for Biosystems Dynamics Research was interested in discovering how EGFR leads to the activation of the key kinase—extracellular signal-regulated kinase (ERK)—in this signaling pathway in fruit fly embryos.

“Our previous work had indicated that EGFR activity spreads in a tissue,” Hayashi says. “We thus wanted to capture the spread of EGFR activity in a real-time video.”

Fruit flies breathe through tube-like structures known as tracheae, which are formed by the inward folding of embryonic cell layers. Researchers have long believed that the timing and location of this folding is governed by a gradient of EGFR-induced ERK activation, where the strength of EGFR−ERK signaling drops off gradually with distance from the site of initial activation. However, an alternative hypothesis suggests that these signals may instead propagate like a wave, with each cell in the outer boundary of this wave successively undergoing EGFR−ERK activation.

By using a fluorescent sensor to visualize this process in developing embryos, Hayashi’s team has now confirmed that the wave model reflects successive activation of EGFR ligand production.

“This switch-like response allows for a domino-like chain reaction of persistent signal propagation without decay,” says Hayashi. “This mechanism is advantageous for some aspects of the developmental process.”

His team confirmed this by performing computer simulations of the two different signaling mechanisms. Their simulations revealed that the gradient fails to induce proper cell layer folding. The researchers also identified a genetic mutation that essentially disables this relay-signaling process, producing a gradient-like profile of EGFR−ERK activation that is incapable of coordinating tracheal formation.

Hayashi notes that this does not entirely invalidate the gradient model of EGFR activation, which is likely to play a role in other developmental processes. “A single molecular toolkit like EGFR can possibly produce two different modes of output—a ‘tuner’ and a ‘switch’—depending on the cellular context,” he comments.

His team intends to explore the other molecular factors that determine which mechanism is employed, and where these different systems may prove advantageous in development.