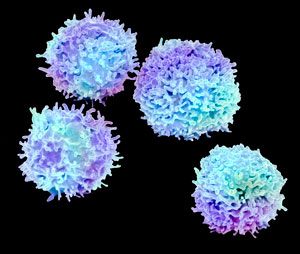 The gene that encodes for a protein found on the surfaces of certain immune cells has been dissected by an all-RIKEN team1. This analysis has uncovered some surprising insights into how these immune cells develop.

The helper T-cells that coordinate the body’s immune response to pathogens all sport a protein called CD4 on their surfaces. Early in development, precursors of T-cells become either CD4-expressing helper T-cells or CD8-expressing killer T-cells, resulting in exclusive expression of the Cd4 or Cd8 gene, respectively. The Cd4 gene has been well studied as a general model for gene regulation, where expression is regulated through the coordinated effects of a ‘promoter’ sequence known as P4 and an ‘enhancer’ sequence known as E4p.

But research to date has strongly hinted at the presence of an additional enhancer that has yet to be discovered. Ichiro Taniuchi, Satoshi Kojo and colleagues at the RIKEN Center for Integrative Medical Sciences set out to identify this sequence.

“It was essential to identify this last piece in order to establish this locus as a complete model gene,” comments Kojo.

The researchers homed in on this second enhancer, called E4m, through gene sequence analysis and experimentation.

Previous studies had shown that mice can produce low levels of CD4-positive T-cells at the late stage of their development even in the absence of the E4p enhancer. This indicates that the additional enhancer must be able to single-handedly drive some degree of helper T-cell maturation. But when both E4p and E4m were absent, CD4 expression was completely eliminated, confirming that Kojo and colleagues had indeed identified the missing sequence.

There were also some unexpected findings. For example, the Cd4 gene contains a ‘silencer’ element, which inhibits the activity of E4p by recruiting a repressor protein called Runx. The team anticipated that the same silencer might also regulate E4m activity, but this turned out not to be the case.

“Our genetic approach revealed that E4m activity is repressed in killer T-cells by additional mechanisms,” says Kojo. “Runx could bind to the E4m region and is still involved in E4m repression, even in the absence of this silencer element.” This suggests the presence of direct repression of E4m by Runx for this gene, and a previously unknown mode of action for Runx-mediated gene inhibition.

A second surprising finding is that another regulatory protein, called ThPOK, apparently collaborates with Runx to inhibit E4m — despite the fact that ThPOK also helps relieve silencing of E4p. Kojo and his colleagues intend to explore the basis and implications of these seemingly contradictory effects on Cd4 expression in future research.