Figure 1: Growth of the inky cap mushroom and subsequent chemical disintegration (right frame) for analysis of its secondary metabolites, which were found to exhibit anticancer and antimalarial activity. © 2018 RIKEN Center for Sustainable Resource Science

An exploration of the small molecules made by a mushroom has led an all-RIKEN team to discover a compound that both inhibits the proliferation of human leukemia cells and combats the parasite that causes malaria1.

The mushroom Coprinopsis cinerea, also known as inky cap (Fig. 1), is often used in molecular biology research because it is easy to grow in the lab. However, little is known about its secondary metabolites—species-specific molecules synthesized from metabolites that are essential for survival, such as glucose and amino acids.

“This common mushroom is unexplored as a natural source of chemicals,” comments Junnosuke Otaka at the RIKEN Center for Sustainable Resource Science. “Our work is like a treasure hunt.” The hidden treasure may include lead compounds for drug research—chemicals whose initial promise stimulates investigation of modifications to create new drugs.

Compounds known as cuparene sesquiterpenoids are potential sources of lead compounds, and they have been reported in a variety of organisms, including fungi and plants. In particular, in previous studies, two related compounds had been isolated from another mushroom, which has a different morphology and habitat from C. cinerea.

Based on these chemical studies, the researchers predicted that C. cinerea produces specific sesquiterpenoids with unusual chemical structures. They obtained three particularly interesting target compounds. Determining their stereochemistry was challenging, but the team confirmed their results by synthesizing one of the compounds and analyzing it using x-ray crystallography. 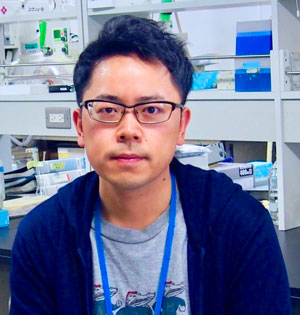 Junnosuke Otaka and co-workers have discovered novel sesquiterpenoids in the mushroom Coprinopsis cinerea, including one with anticancer and antimalarial activity. © 2018 RIKEN

The team then looked for significant biological activities, partly motivated by the fact that some similar compounds are potent antimicrobials. But they got more than they had bargained for. “We didn’t expect to find activity against human leukemia cells or the malaria parasite,” says Otaka. This surprise may open up new avenues in anticancer and antimalarial research.

The most effective compound in the biological activity tests, which has been named hitoyopodin A after the Japanese name for C. cinerea, has a three-ring chemical structure composed of aromatic rings and an oxygen atom. Otaka speculates that the rigidity of this unusual ring structure may be crucial for bestowing the antileukemia and antimalarial activity. He emphasizes, however, that more research is needed to test that idea and to gain clearer understanding of the mechanisms involved.

Further studies could include identifying the molecules that hitoyopodin A interacts with to bring about medically useful effects. The team will also investigate why the molecules they have discovered are made by the mushrooms. “We want to identify their ecological role in nature,” Otaka explains. This will include testing hypothesized involvement in generating other secondary metabolites.