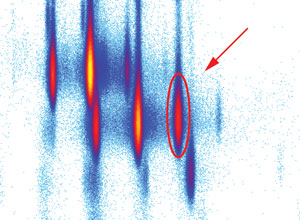 Figure 1: Analysis of the make-up of the beam obtained after calcium-48 ions collided with a carbon target. The component indicated by the arrow is aluminum 41. Reprinted, with permission, from Ref. 1 © 2019 by the American Physical Society

For the first time, scientists have measured the energies of gamma rays emitted by super-heavy magnesium nuclei, but the results defy textbook expectations1.

Atomic nuclei appear deceptively simple, being made up of positively charged protons and electrically neutral neutrons held together by the nuclear strong force. But their underlying complexity is so great that scientists can perform exact calculations only for the lightest elements. For heavier nuclei that contain more than about ten sub-atomic particles, nuclear physicists rely on theoretical models. Consequently, any experimental measurements of these bigger nuclei are keenly sought so that these models can be better informed.

Now, Hiroyoshi Sakurai and Pieter Doornenbal of the RIKEN Nishina Center for Accelerator-Based Science and co-workers have packed 28 neutrons into a magnesium nucleus and measured the gamma rays emitted. This is almost twice the usual number of neutrons and is thought to be close to the maximum number that a magnesium nucleus can contain. Indeed, magnesium 40 (so-called because it has 12 protons and 28 neutrons) has so many neutrons that if it were possible to make a lump of it, it would be more than 1.5 times heavier than normal magnesium, despite having identical chemical properties.

Sakurai and Doornenbal measured the gamma-ray spectrum of magnesium 40, anticipating that the energies would be similar to those for lighter magnesium isotopes. But to their surprise they turned out to be considerably lower. “This result was very surprising and unexpected,” comments Sakurai.

Furthermore, the measured energies were much lower than those predicted by theoretical models. “It’s almost like some kind of phase transition happens at magnesium 40,” says Sakurai. “Nobody knows what is going on. It’s mysterious.”

To perform the measurement, the team used the RIKEN’s Radioactive Isotope Beam Factory (RIBF), which generates extremely intense ion beams using a particle accelerator. “This facility is better than any other in the world right now,” notes Doornenbal.

The scientists slammed a beam of calcium-48 ions, accelerated to about 70 per cent of the speed of light, into a beryllium target, which produced a beam of aluminum-41 ions. These were then collided with a polyethylene target, which stripped off a proton to give magnesium 40. Over the course of about a week, the team produced just a few hundred magnesium-40 nuclei from several quintillion (1018) calcium-48 ions.

Following upgrades to the RIBF, the team intends to perform follow-up measurements to obtain more clues about why magnesium 40 is so special.