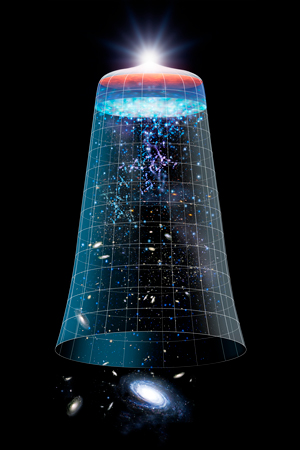 RIKEN researchers have extended the effective field theory so that it can treat non-equilibrium systems such as the inflationary Universe, which existed shortly after the Big Bang (indicated by the tip of the cone in this illustration). © DETLEV VAN RAVENSWAAY/SCIENCE PHOTO LIBRARY

A powerful mathematical method for simplifying the analysis of highly complex systems has been extended by a RIKEN-led team1. This will enhance its usefulness for researchers in a wide range of fields.

Attempting to mathematically describe the world around us is profoundly difficult. Most real systems have so many interacting elements that the equations quickly become impossible to solve.

A common approach is to simplify the situation by removing interactions that have a negligible effect on the characteristic being modeled.

“When considering the thermodynamic properties of water, for example, we don’t need to think about its microscopic components, such as the elementary particles,” explains Masaru Hongo from the RIKEN Interdisciplinary Theoretical and Mathematical Sciences (iTHEMS) program. “We need only consider information such as whether it is in the liquid phase or is forming solid ice.”

This concept is embodied in modern physics by the effective field theory, which looks only at interactions on the same, or greater, length scale at which the physical phenomenon acts. Interactions that occur at shorter distances are averaged into a ‘field’ that acts on the whole system uniformly, and this can often be simplified further by identifying symmetries within the system.

Effective field theory has been successfully applied to a wide range of physical systems in fields such as cosmology, condensed-matter physics and particle physics. But, until recently, the approach has been mainly applied to equilibrium systems; that is, those that have settled into their lowest energy state. Non-equilibrium ‘open’ systems offer an even broader range of fascinating phenomena including the expanding Universe and even the synchronization of fireflies.

“An interesting motivation for looking at these systems is that we now have the possibility of breaking time translational symmetry, which cannot be broken in conventional equilibrium systems,” says Hongo.

Hongo, along with colleagues Suro Kim and Toshifumi Noumi from Kobe University and Atsuhida Ota from Utrecht University in the Netherlands, has now developed an effective field theory that can be applied to non-equilibrium systems with time-dependent physical quantities, which captures their macroscopic behavior based only on the symmetry-breaking patterns.

The team used their approach to model the simplest situation with a time-dependent variable, which can be regarded as a ‘toy model’ for inflation in flat space-time. They think it should be straightforward to extend the argument to a realistic inflation in curved space-time. It may also be possible to apply the concept to chemical or biological systems.

“We considered the most basic type of symmetry: time translational symmetry,” says Hongo. “We will next consider constructing an effective field theory for spontaneous breaking of the symmetries seen in systems such as solids, liquid crystals, superfluids and magnetic materials.”