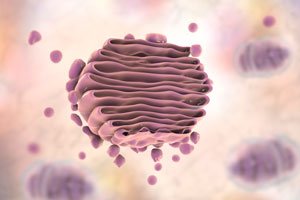 The Golgi apparatus functions as a central delivery system for the cell, and it mainly modifies, stores and transports proteins and lipids made elsewhere in the cell. © KATERYNA KON/SCIENCE PHOTO LIBRARY

The transport of cargo in a tiny cellular structure, or organelle, called the Golgi apparatus has been visualized in living yeast cells for the first time by RIKEN researchers1. This advance should help researchers gain a better understanding of how diseases arise when this transport goes awry.

In eukaryotic cells, many new proteins begin life in an organelle known as the endoplasmic reticulum (ER). From there, they are taken to the side of the Golgi apparatus (Fig. 1) facing the ER (the cis side), where they are processed and sorted for delivery from the opposite side (the trans side) to various destinations inside and outside the cell.

Researchers have debated what exactly happens to protein cargo inside the Golgi. “Studying cargo transport in the Golgi is a hot topic in cell biology,” notes Kazuo Kurokawa of the RIKEN Center for Advanced Photonics. “I’ve wanted to uncover its mechanism ever since joining RIKEN in 2005.”

Cell biologists have suggested various mechanisms for how proteins travel though the Golgi. In one such proposed mechanism, known as cisternal maturation, protein cargos delivered from the ER are transported through the Golgi in cisternae—disk-shaped sacs that make up the Golgi and that mature from cis to trans cisternae—much like items on a conveyor belt in a production line.

An alternative mechanism is that each cisterna stays in its place and does not change, while protein cargo-containing vesicles progress through the Golgi. 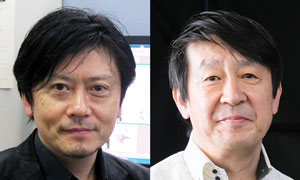 Kazuo Kurokawa and Akihiko Nakano have visualized the transport of transmembrane cargo in the Golgi in living yeast cells. © 2019 RIKEN

Now, by using a confocal microscopy technique they previously developed, Kurokawa and co-workers have imaged transmembrane cargo transport in the Golgi of living yeast cells. The images they obtained reveal that cargo proteins are transported by cisternal maturation through the Golgi.

This finding, which confirms results in earlier studies by the group, could help researchers to discover what happens in diseases where the transportation mechanism goes wrong. “If plasma membrane proteins such as growth factor receptors were mutated to localize in wrong places, their mislocalization could cause diseases,” says Kurokawa. “I hope these findings will lead to an understanding of the mechanism behind the mislocalization of mutant proteins.”

The researchers also noticed that some of the cargo appears to revert to an earlier processing stage in the Golgi. They speculate that there may be a mechanism that checks whether cargo is ready to go on to the next step of transport.

“An intriguing idea is that the Golgi might have a kind of quality-control system, which returns cargo to an earlier zone if it hasn’t been sufficiently processed,” Kurokawa says. “We want to explore this next.”