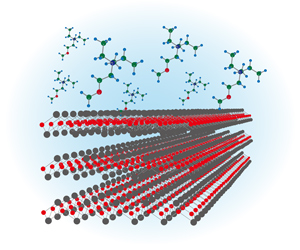 Figure 1: By immersing an ultrathin film of iron selenide (FeSe) in an ionic liquid and controlling the temperature and voltage, RIKEN researchers could vary the film thickness while measuring the film’s electrical and thermoelectric properties (red spheres: iron atoms; dark gray spheres: selenium atoms). Modified from Ref. 1 and licensed under CC BY 4.0 © 2019 S. Shimizu et al.

When thinned down to a sheet a few atoms thick, the superconductor iron selenide (FeSe) can efficiently convert heat into electricity, researchers at RIKEN have discovered1. This opens up the possibility that similar multifunctionality may be lurking in other two-dimensional materials.

Ultrathin films often behave quite differently from the same material in bulk form. For example, bulk FeSe superconducts at temperatures below 8 kelvin (−265 degrees Celsius), whereas a single-atom layer of FeSe superconducts at 65 kelvin. This is surprising since the conductivity of semiconductors usually drops the thinner they become.

Sunao Shimizu, who was working at the RIKEN Center for Emergent Matter Science (CEMS) at the time of the study, along with his CEMS colleagues and other collaborators, has now found that in addition to high-temperature superconductivity, ultrathin films of FeSe exhibit excellent thermoelectric properties. This is the first time that a material has been shown to have both properties.

Thermoelectric materials are of great interest because they can generate electricity from waste heat and thus could be used to power devices that currently require batteries or some other power source.

The researchers used a clever setup to perform the measurements. They immersed the FeSe film in an ionic liquid (Fig. 1). Then, by controlling the voltage applied to the film and the temperature, the scientists electrochemically etched the film down to a few monolayers. In this way, they could control the film thickness while simultaneously measuring the film’s electrical and thermoelectric properties.

“Our method is very powerful for realizing ideal conditions, such as a tunable carrier density and structures free from significant disorder,” explains Shimizu. “It is thus a very effective way to elucidate the intrinsic performance of materials.”

This finding might represent just the tip of the iceberg. “The unprecedented coexistence of a giant thermoelectric power factor and high-temperature superconductivity in ultrathin FeSe suggests that other multifunctional materials are waiting to be found,” notes Shimizu. “This illuminates a new research direction for functional thermoelectric materials.”

The team will now use the same method to look at other thin materials. “We intend to extend our study by characterizing the thermoelectric properties of other two-dimensional materials as well as nanostructures,” says Shimizu.