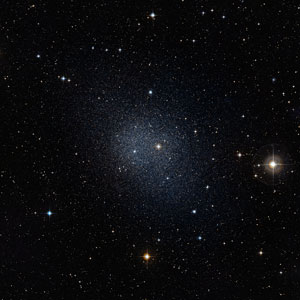 The dwarf galaxy Fornax contains stars where the s-process may be responsible for enriching strontium levels. ESO/ Digitized Sky Survey 2. Licensed under CC BY 4.0

Simulations of a dwarf galaxy by RIKEN astrophysicists have revealed the various processes by which moderately heavy metals such as strontium are birthed1. They have found that at least four kinds of stars are needed to explain the observed abundance of these metals in dwarf galaxies.

Stars are the alchemists of the cosmos. Many of the lighter elements in the periodic table are generated by nuclear fusion in stars, for example. But the origins of some heavier elements are more mysterious.

Fusion reactions can make elements as heavy as iron and nickel, while even heavier elements are created when nuclei capture extra neutrons. Extreme conditions, such as those in a supernova or a merger between two neutron stars, drive the rapid neutron-capture process (r-process). In contrast, the slow neutron-capture process (s-process) happens more gradually, for example in so-called asymptotic giant branch stars at the ends of their lives. Each process—and each environment—generates a different blend of heavy elements.

The metals forged in these processes are eventually ejected into space as the star dies and may be incorporated into new stars. Tracking the distribution of these inherited elements can help to understand how they were made. 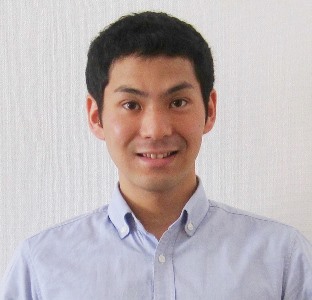 Yutaka Hirai and two co-workers have used simulations of a dwarf galaxy to study the different neutron-capture processes that give birth to moderately heavy metals such as strontium. © 2020 RIKEN

Strontium, for example, is one of the lightest elements created in the r-process. Some stars in dwarf galaxies close to the Milky Way have unusually high strontium-to-barium ratios, which suggests they are being produced in different environments.

To examine the provenance of this strontium, Yutaka Hirai at the RIKEN Center for Computational Science and two colleagues simulated a dwarf galaxy with a similar distribution of metals as those observed in nearby dwarf galaxies. Then they looked at which stellar processes led to strontium enrichment.

The researchers found that neutron star mergers and asymptotic giant branch stars could not explain all of the strontium enrichment in their simulation. Some of the enrichment came from rotating massive stars, where the mixing of materials inside the star can generate neutrons for a particular form of s-process.

“But our most important finding is that ejecta from electron-capture supernovae can form stars with highly enhanced in strontium-to-barium ratios,” Hirai says. “An electron-capture supernova explosion is expected to occur in the lowest mass range of massive stars, eight to ten times the mass of the Sun.” These stars are notable for having cores rich in oxygen, neon and magnesium.

Hirai’s team now intends to carry out a more detailed comparison between simulations and observations of the elemental abundances of stars in and around the Milky Way.