Measuring the magical wavelength of cadmium 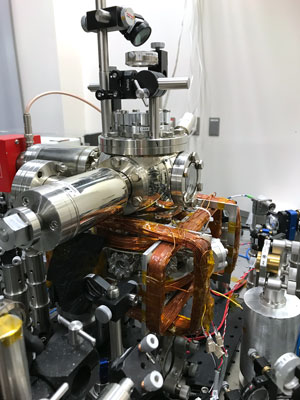 Compact, ultraprecise clocks based on cadmium that can be operated in a room-temperature environment are closer to being realized thanks to the measurement of a key property of cadmium atoms by RIKEN physicists1. Such clocks could be used to measure local variations in the Earth’s gravitational field, making them useful for investigating earthquakes, volcanic activity and plate tectonics.

Clocks known as optical lattice clocks can measure time to incredibly high precision—so high that the time it would take for them to become out by half a second exceeds the age of the Universe.

“The accuracy of the clock frequency of state-of-the-art optical lattice clocks has reached 18 digits,” explains Atsushi Yamaguchi of the RIKEN Quantum Metrology Laboratory. “No other physical quantity can be determined to such a high precision.”

Atsushi Yamaguchi and his team have experimentally and theoretically determined the magic wavelength of a clock transition of cadmium, paving the way for cadmium-based optical lattice clocks. © 2020 RIKEN

As a first step toward realizing cadmium optical lattice clocks, Yamaguchi and co-workers have measured a property known as the magic wavelength.

Optical lattice clocks exploit this property of the magic wavelength. “This is real magic because we can trap the atoms in a potential but then the energy separation between these states is unaltered so we can still measure the resonance frequency,” says Yamaguchi. “That’s the trick.”

Cadmium has not been used for optical lattice clocks so far because deep-ultraviolet lasers are required for clock operation, which are difficult to make. To realize the measurement, Yamaguchi’s team collaborated with a group at the University of Arizona in the US and successfully built powerful and stable deep-ultraviolet lasers.

The team is now racing against other groups to make a cadmium optical lattice clock.