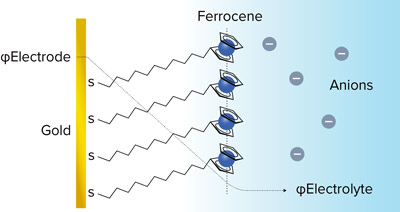 Figure 1: Schematic of an electrochemically active ferrocene-terminated self-assembled monolayer on gold, which was used as a model electrochemical interface. The electrochemical environment is illustrated by the potential profile across the interface (dashed line) and it was spectroscopically probed in the experiment. Reproduced from Ref. 1 and licensed under CC BY 4.0 © 2020 R. A. Wong et al.

Using a two-pronged approach that will help to understand and design more-efficient energy storage systems, RIKEN electrochemists have explored the distribution of electrical charges at the interface between the electrode and electrolyte1.

Now, Raymond Wong of the RIKEN Surface and Interface Science Laboratory and his colleagues have probed the energetics and structure of the charged interface between a gold electrode and various electrolytes (Fig. 1).

They did this by assembling a monolayer of redox-active molecules on the electrode surface. One end of these long-chained molecules bound to the electrode, while the other one—a ferrocene head containing an iron atom—was exposed to the electrolyte. The ferrocene unit can be easily oxidized and reduced by applying an appropriate voltage that causes it to switch between neutral and positively charged states. Such a ferrocene monolayer is an ideal probe for exploring the structural and energy changes arising from the compensation of the monolayer charge by different kinds of anions in the electrolyte.

Wong and co-workers combined cyclic voltammetry, which is routinely used in electrochemistry, with photoelectron spectroscopy, which provides direct information on the behavior of the electrons at the electrode–monolayer–electrolyte interface. They performed the electrochemical measurements in a chamber, which was then evacuated and transferred to an ultrahigh-vacuum chamber, where they conducted the spectroscopic measurements. This procedure enabled the team to obtain snapshots of the electrode–monolayer–electrolyte interface under different applied potentials.

“Our goal was to gain an improved understanding of the electrode–electrolyte interface at the microscopic and molecular level, which is not readily accessible by other electrochemical or in situ methods,” explains Wong.

The method is versatile and can be applied to other systems, Wong points out. “Our method can be extended to study the interfacial energetics in semiconducting electrodes and can provide more insights into electrolyte effects and interfacial energetics in other surface-bound redox-active systems with relevance in biochemical sensing, redox-induced nanoactuators and pseudocapacitive energy storage.”