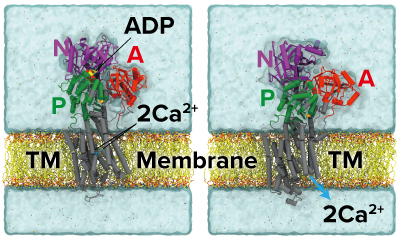 Figure 1: Structures of calcium pump before (left) and after (right) it has transported ions into the sarcoplasmic reticulum (A, N, P: three cytoplasmic domains; TM: transmembrane). Reproduced from Ref. 1 and licensed under CC BY 4.0 © 2022 C. Kobayashi et al.

The pumping action of the calcium pump protein—an intricate molecular machine with several moving parts that helps control muscle contraction—has been detailed with exquisite precision by RIKEN biophysicists1. By providing a blueprint of structural changes that occur during operation of the protein, the findings could aid the development of new treatments for skeletal myopathies and heart disease.

Muscle movement is fundamentally a calcium-driven process. When a muscle cell receives the signal to contract from its associated nerves, it releases a flood of calcium ions from a special intracellular container known as the sarcoplasmic reticulum. Those ions then set the muscle’s molecular motors into action, spurring contractions until the calcium is removed.

That’s where the calcium pump comes in. After a frenzied wave of calcium-induced activity, the pump uses energy in the form of adenosine triphosphate (ATP) to return calcium ions to their intracellular storehouse.

Previously, scientists had relied on structural and biochemical techniques to infer how the calcium pump achieves this molecular maneuver. However, structural techniques provide only snapshots of the protein at work while biochemical experiments indicate molecular states that are pertinent for the protein’s function. These techniques give a good sense of what the pump looks like before and after completing its job of calcium transport. 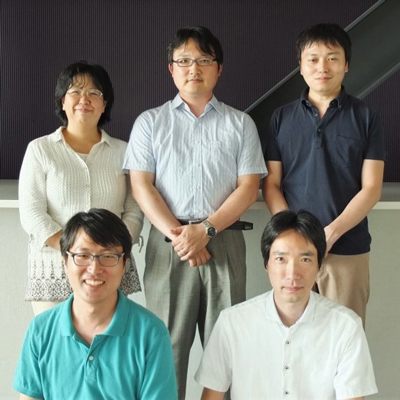 Yuji Sugita (center of back row) and his team have determined how a protein pump transports calcium to help control muscle contractions. © 2022 RIKEN

The steps in between, however, were something of a mystery—that is, until Yuji Sugita at the RIKEN Center for Computational Science and his co-workers determined the pump’s intermediate forms using molecular dynamic simulations. “Our computational studies have filled in such missing information and could give new insights into the molecular mechanisms of ion pumping,” says Sugita (Fig. 1).

Using sophisticated computer models that account for structural changes and energetic profiles, the researchers identified a handful of transition states. They also demonstrated how the rapid exchange of calcium ions for protons at the pump’s inner face is critical for releasing calcium into the sarcoplasmic reticulum.

Sugita first started interrogating the calcium pump’s movements in the early 2000s, but his methods were fairly rudimentary by today’s standards and he could only get a crude picture of the protein’s dynamic nature. His success now, Sugita says, owes a lot to improvements in modeling techniques and software tools, along with access to RIKEN’s supercomputer resources.

With continued innovations, Sugita hopes to unlock even more of the pump’s structural secrets. A commentary on the study by Sugita’s team says their work “provides opportunities for experimentalists, theoreticians, and simulators; their detailed picture advances our current understanding and points toward the next level.”