Discovering how heavy elements were made by measuring masses of short-lived, nuclear-rich nuclei 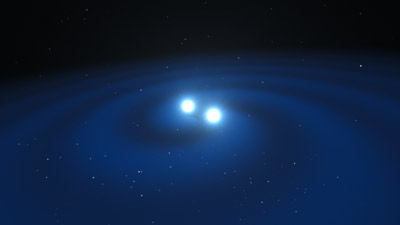 Figure 1: Mergers of neutron stars are thought to have created many of the heavier elements in the Universe today. © ESO

Nuclear physicists at RIKEN have measured the mass of a neutron-rich nucleus of the element palladium to a greater accuracy than ever before1. When this mass is fed into models of merging neutron stars, it reproduces well the abundance of heavy nuclei found in the Solar System.

The Big Bang is thought to have only produced the three lightest elements: hydrogen, helium and lithium. The other 80 or so stable elements were formed through later processes such as supernovae, the death of low-mass stars, and nuclear fission induced by cosmic rays.

The mergers of neutron stars may have created a large proportion of heavy nuclei that contain 41 protons or more. They are conjectured to create new elements through nuclei capturing loose neutrons, followed by a neutron decaying into a proton and an electron through beta decay.

A long-term aspiration of nuclear astrophysicists is to be able to reproduce the abundances of the elements that we see in the Universe today. But that requires precise knowledge of nuclear parameters including nuclear masses, which is challenging because many neutron-rich nuclei are highly unstable and have only fleeting existences.

“A big problem is that the abundances are very difficult to calculate because the nuclei involved in this process are unstable and so we don’t know much about them,” explains Sarah Naimi at the RIKEN Nishina Center for Accelerator-Based Science. 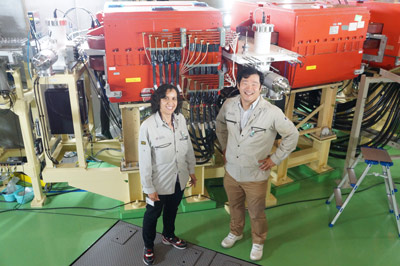 Sarah Naimi (left) and her co-workers have measured the mass of a neutron-rich nucleus of palladium and used it to reproduce solar abundance of nuclei with atomic numbers 122 and 123. © 2022 RIKEN

Now, Naimi and her co-workers have measured the mass of a palladium nucleus (46 protons) containing 77 neutrons to a higher accuracy than before and have used their measured value to estimate the abundances of heavy nuclei in the Solar System.

Since the half-lives of some unstable nuclei could be shorter than 10 milliseconds, the researchers developed an ultrafast measuring technique that was about 100 times faster than the conventional method.

But measurement speed wasn’t the only advantage of the setup. “The uniqueness of our facility is that particles are pre-identified before being injected into the storage ring,” explains Naimi. “Since we always know what we inject into the storage ring, we could measure neutron-rich nuclei with very short half-lives.”

When the team dropped their measured value for the mass of the neutron-rich palladium nucleus into a model for element production via the neutron capture process, the estimates given by the model for the abundances of nuclei with 122 and 123 protons and neutrons were very close to observed abundances. “We were really surprised at how well our result reproduced the solar abundances of these elements,” remarks Naimi.

The team now intends to use their method to measure the masses of nuclei with even shorter half-lives.